From 11-22 July, the team of the D1-Project attended the 2016 High-Level Political Forum on Sustainable Development in New York. During the HLPF, the team presented findings of previous research and conducted interviews with representatives of UN, donor and funding organizations, and partnerships. 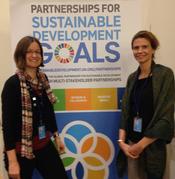 On the 18th of July, Dr. Marianne Beisheim and Dr. Anne Ellersiek presented findings from the SFB700/D1 project during a special event, the „Partnership Exchange“. A dialogue entitled „Multi-Stakeholder Partnerships and the 2030 Agenda. How to Improve and Review their Contributions to the Implementation of the SDGs” and co-organized by the project team discussed the role of global and national platforms and meta-governance frameworks to improve the contribution of partnerships to the implementation of the Sustainable Development Goals (SDGs). Our presentation (PDF) focused on options for the UN-system to facilitate a coherent and results-oriented meta-governance of partnerships. The video of the panel can be watched here. On July 17th, Marianne Beisheim and Anne Ellersiek participated in a workshop on the theme of „Multi-stakeholder partnerships for implementing the 2030 Agenda“. This workshop was co-organized by the Global research Institute and CatalySD and sought to carve out „reflections and next steps“. In her introductory speech, Marianne Beisheim presented the results of the independent analytical paper for the 2016 ECOSOC Partnership Forum. On July 19th, Anne Ellersiek participated in the SDG Business Forum which looked at private sector participation in partnerships.
Furthermore, Marianne Beisheim presented her work on „follow-up and review“ at several occasions during the HLPF: on the 11th of July she contributed to a side-event organized by the IASS on the topic of „thematic reviews“, on the 14th of July during an UNITAR Learning Session on „national reviews“, and on the 19th of July, in an expert commentary on the presentations and reports of four member states as part of the official series of voluntary national reviews (see the interview with UN-DESA). During a side-event on the theme of „Building Capacities of Public Institutions for Implementing the SDGs: Concrete Challenges and Potential Solutions“, Marianne discussed UNDP’s efforts to support fragile states in their implementation of the SDGs. Further events during the HLPF focused on topics of relevance to the D1-team, for example panels on „Multi-stakeholder Engagement for the SDG implementation“ and on „Creating Policy Ownership at the National Level“.