The workshop is organized by the Center for Middle Eastern and North African Politics (Arbeitsstelle Politik des Vorderen Orients) in cooperation with SFB 700 "Governance in Areas of Limited Statehood", Freie Universität Berlin, 9-10 February 2012. 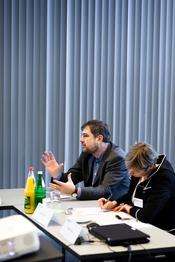 The recent upheavals in the Arab world have challenged both statist and centrist assumptions of Middle Eastern politics. New social movements in the urban centers, virtual networks as well as actors and actions from the so-called periphery changed the political landscape of the region within months. The workshop will provide contributions that investigate forms of governing and contestation beyond central regimes and reflect on their significance for analyzing the changing dynamics of government and politics. It will draw intensively on case studies from the Arab World while reaching out to experiences in Africa, Latin-America and Asia as well. Conceptually, different authors will provide theoretical explanations for the transformation of state in its relation to social forces as well as for the relation between formal and informal institutions. In understanding politics beyond the centre, the workshop aims to close the existing research gap on contested politics in developing countries enhancing it by insights from the periphery.